The Power to Predict

With the ultimate long-range view, the EEC S-Band radar gives you the ability to plan, predict and protect – before severe weather strikes. This massive power makes our S-Band systems ideal for covering huge expanses of land and water, analyzing multiple fronts of heavy precipitation.

Monsoons. Hurricanes. Cyclones. Blizzards. To make the best long-range predictions of the biggest weather makers, you need to have the biggest radar with the lowest attenuation. Both the Magnetron-powered and Klystron-powered Defender S series are designed and engineered with an output of 850kW to 1000kW - more radiated power than any other commercially available S-Band weather radar!

Coupled with our super-sensitive IQ2 digital receiver and signal processor for precise data processing, these towering S-Band systems are the best choice for a clean and true picture of multiple, long-range, intense weather phenomena.

Additionally, our turnkey design, manufacturing, and installation processes allow us to configure your S-Band radars to meet your specifications. Among the many options are single or dual-polarity transmitters and a variety of full-featured control and display systems. You can even choose the type of installation and radome that best fits your environmental needs.

In 2016, EEC became the world’s first weather radar solutions provider to manufacture and deliver a high-frequency S-Band weather radar system. The Defender SK1000H is powered by a 1-megawatt Klystron transmitter and comes standard with dual-polarization capabilities. By operating in the higher end of the S-Band frequency spectrum, 3.5-3.6 GHz, the Defender SK1000H allows users to capitalize on all the advantages of an S-Band weather radar at a much lower price-point. Here’s how it works...

Achieving a beam width less than 1 degree is the "gold standard" by which any weather radar system is measured. Such a beam width speaks to the quality of the antenna and the overall accuracy of the system. A typical S-Band radar system operates in the 2.7 – 3.0 GHz frequency range using an 850kW Klystron transmitter. In order to attain a beam width less than 1 degree, you need a 28-ft (8.53m) antenna. Such a large antenna requires an even larger radome; 40-42-ft (12.2 – 12.8m). All of these large components come with large costs. Additionally, civil works must account for these massive, heavy parts.

The Defender SK1000H operates in the 3.5 – 3.6 GHz range of the S-Band frequency. This means that in order to attain a beam width that is less than 1 degree, you only require a 20-ft (6.09m) antenna. Since the antenna is smaller, so is the radome; 30-ft (9.14m). This, combined with reduced civil works and life-cycle maintenance costs, result in a savings of at least $500,000 as compared to standard frequency S-Band systems! The Defender SK1000H also provides for 250kW more power than a standard S-Band system. EEC’s high-frequency S-Band radar does all this while maintaining the same performance statistics as a standard frequency S-Band system; no impact to sensitivity or detection range. The Defender SK1000H is the perfect combination of S-Band radar performance at an economical price.

Dual-Polarization – The Future Is Here Today

Over 15 years ago, EEC pioneered dual-polarity radar. Today, both of our S-Band models are available with either EEC's industry-standard single-polarization or with our new, highly advanced dual-polarization system, incorporating features that are years ahead of anything else on the market.

Working with world-renowned experts and the University of Oklahoma, we have developed better algorithms and end-to-end dual-polarization measurements. This not only results in more accurate estimates of rainfall, but also provides better discrimination between different types of precipitation and non-meteorological signals, such as birds, insects, dust storms, or even an approaching tornado's debris field.

We have also developed proprietary technology to significantly improve clutter suppression performance in our popular and dependable Magnetron systems. The final result is obvious – EEC dual-polarity systems provide the highest resolution data available in the industry. 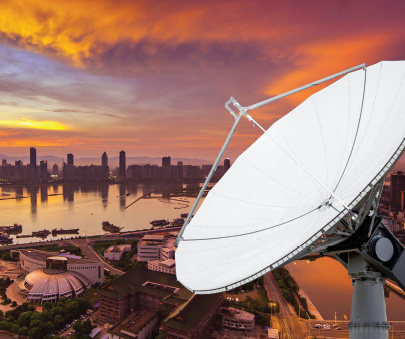